With this being my first year both teaching and in China, I didn’t know what to expect. Teaching Grades 1 and 2 wasn’t my preferred option, and I knew it would be challenging with regards to classroom management. But I was presented with my own unique challenges, such as having to switch schools after just one month. So to say I got off to a rocky start would be putting things lightly.

Landing in China was a challenge in and of itself, though I adapted to life here fairly quickly.

Teaching was a different story. I started out at Yizhan Primary School in Songgang, and, since I was still living in the Mellow Orange Hotel, it took an hour and a half to get to and from school every day. My first lesson was the equivalent of being thrown into the fire pit, as the kids couldn’t sit still or be quiet for even half a second. I ultimately made it through only 10 minutes of class and half of my “All About Me” presentation before the assistant teacher had to step in for me.

As the weeks went on, classroom management didn’t get any better, but I received strong support from CIPTC’s mentors and started gaining more confidence. Nonetheless, I was still asked to change schools, and had to pass a demo class in order to get admitted.

All told, it wasn’t until I had moved into my own place and started teaching at Shanghe Elementary School before I started feeling comfortable in my own skin. Shanghe has been nothing but good to me during my first year. The teachers and principal have given me radiantly positive feedback, while seeing my students is often the best part of both my day and theirs.

I’ve also enjoyed all the extra-curricular activities I’ve gotten involved with at my school. English Week was the school’s chance to showcase their foreign teacher, as they had me lead all the kids in song and dance on Monday morning. In addition, I had to make an announcement every day before singing a song of my choice at the children’s drama competition. It was a tall order but Fiona, my contact teacher, guided me through the entire process. And, to the surprise of no one, me singing “YMCA” was a big hit at the school.

The teachers’ competition at the end of first term was a different beast, since I had to sing a Chinese song and choreograph it with my office colleagues. But, once again, I received lots of support, and we crushed it to the tune of second prize. Experiences like that, as well as the real and fake birthday dinners we’ve gone out for, have provided a unique bonding experience with the teachers at my school.

And that’s just the teaching side of things. My first year in China wouldn’t have been as exceptional as it has been if not for the amazing people that I’ve met. CIPTC provides many opportunities with which to make new friends, with the monthly excursions chief among them.

The company’s winter trip to Guangxi province ranks as one of the highlights of my year. It gave us an up-close view of one of China’s most famous landmarks – the Li River and mountain ranges displayed on the 20 RMB note. It was also a unique bonding experience that brought me closer to some of my friends than ever before, and allowed me to explore other parts of Asia with said friends.

And, of course, my experience with CIPTC would not be complete without mention of the company’s football team. I joined the team because I am a massive football fan and wanted the sense of camaraderie. But my fellow teammates didn’t just become my close friends, but also my brothers. 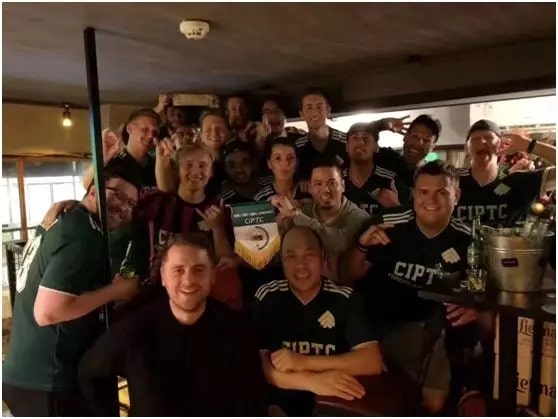 This was only the Foreign Wanderers’ first full year, so this season was a massive stepping stone towards building the team’s foundation. Some say results are all that matters, but whether we win or lose, there’s always great company to be had. Our one-year anniversary celebration was evidence that we work hard but also play hard.

Do I miss Canada? Sure, I do. But all the positive experiences during my first year in China ensured that the days where I would feel homesick are few and far between. This summer will provide a much-needed break, but I’ll feel anxious to come back to China and get going again.