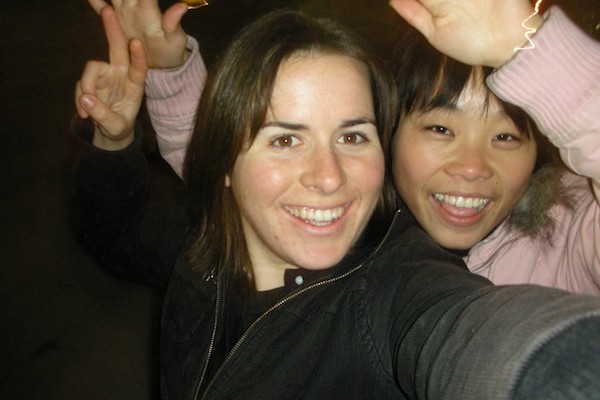 My name is Leslie Forman. I am from San Francisco, California, and I have lived and worked in China for about four years, in a wide variety of industries.

I landed in China in 2006 to teach English at Jiaxing University in Zhejiang Province. I’d never been to Asia, never studied Chinese, and never even taken a class about China. Here’s how I did it, and how this rather random choice has launched my career.

In May 2006 I graduated from the University of California, Berkeley with a degree in Latin American Studies. I loved my major – I had studied Spanish my entire life (starting with nursery rhymes and Loteria games with my Mexican babysitter Petra), I enjoyed the small classes and personal advising (unusual at a huge school like Cal), and I had the opportunity to study in Chile for a full year (amazing, for so many reasons!)

A few days after graduation, I thumbed through my well-worn copy of Delaying the Real World– an inspiring and practical book that should be on every adventurous twenty-something’s desk – and looked up just about every international opportunity listed. I stumbled upon CIEE Teach in China, and its deadline was one week later. CIEE connected me with its alums, who urged me to take the plunge. I spent the summer volunteering in English classes for recent immigrants and studying listen-and-repeat Mandarin CDs.

In three months, I transformed myself from being a student of Latin America to a teacher in China, with no specialized training. Why? My short answer: “Because I could.” It’s definitely the most empowering move I’ve ever made.

I landed at Jiaxing University, in a “small, small town” of a million people about an hour south of Shanghai. I taught Oral English classes to about 600 students, all 3 years younger than I was.

I’ll never forget my second lesson. I chose LOVE as the day’s topic, and played songs Bob Marley’s “Is this love?” I wrote the first verse and chorus on the chalkboard and we sang it together three times. I explained each line in my clearest English teacher voice. Then, I asked the class, “What do you think?”

“Excuse me, teacher. We want to know what you think first.” I had heard that students respected teachers more than in the U.S., but this moment showed me what that means in the classroom. I then explained that I truly wanted to know their opinions, and gave some suggestions. “Do you think it’s beautiful? Romantic? Boring? Fun? Silly? Annoying….?”

Once I turned it into a multiple-choice question, and emphasized that I was not looking for one “right” answer, my students actually opened their mouths. Over the next year, through songs, games, skits, and debates, at least some of my students built their confidence in speaking English, and I learned even more.

My year at Jiaxing University showed me a much stricter style of education. Freshman orientation consists of military training: marching across campus in the scorching heat in green fatigues. At 6:50 each morning songs like “Where Have All the Flowers Gone?” blasted through the campus speakers to wake everyone up. The electricity in the dorms shut off at 11pm: bedtime.

Through games, skits, songs, and debates, my more courageous students built up their confidence in speaking English – and they taught me so much about China.

The most tangible lesson I learned in Jiaxing?

How To Communicate in Chinese. As I mentioned before, I landed in Jiaxing having never studied Chinese. My first teachers were Jiaxing’s vegetable vendors. Almost every day, I would visit the market, and the ladies would quiz me: tomato, eggplant, cucumber, etc. I had similar conversations with fruit sellers, bakery girls, taxi drivers, and migrant workers on the train. Like a toddler.

I quickly learned how to get what I wanted. Had I moved directly to Shanghai or Beijing to work in an English-speaking office, I might not have had this opportunity for several reasons: more English-speaking friends, active expat scene, longer working hours, etc.

Had I studied Chinese in college, I probably would have been intimidated by all the characters, and might not have stuck with it. (I know myself well.)

I am so grateful to have had the opportunity to informally fumble through Chinese, in a relaxed environment.

My Following Steps (in Brief)

After 1.5 years in China, I found myself homesick and returned to San Francisco. During my stint with socially entrepreneurial software company there, I got very involved with a China-focused microfinance non-profit called Wokai. I then decided to move to Beijing.

Now I have been in Beijing for more than two years. I have worked on a wide variety of projects, as a corporate trainer, copywriter, editor, and event planner. I have studied Chinese with a wonderful tutor and in small classes. I sometimes use my Latin American Studies degree to chat with Spanish-speaking friends. In China, nothing is easy, but so much is possible.

My original decision come to China, to teach through CIEE at Jiaxing University, challenged my assumptions and gave me space to explore a completely unfamiliar country. And for that, I am so grateful.