There are many unique labels that belong to him

He is Marlin, a foreign teacher in the English Department of our school,

From Canada, known as the “Maple Leaf Country”.

“Give a man a fish, he eats for a day. Teach him to fish, he will never go hungry..” What he said is that “giving someone a fish can relieve his temporary hunger, but not a long-term solution. If you want him to always have fish to eat, it is better to teach him to fish. “The method”, having fish to eat is the goal, fishing is the means. Education is actually the same. A competent teacher should not only give students knowledge, but also teach them the methods of self-learning. Marlin is such a good teacher who knows how to “teach them to fish”.

He knows how to stimulate students’ interest in learning and let students take the initiative to learn and do. On the other hand, he also has a unique teaching method. Not only is the tone humorous, but sometimes he learns how to call animals in class. He pats the table and knocks on the bucket to explain the pronunciation and intonation to his students. Because the Chinese speaks an average English intonation, he will think of many ways to better let his students learn. The important thing is that he will also exchange teaching methods with Chinese teachers, and combine Chinese and Western to make education happier.

Although he is from Canada, although he has a different cultural background and ideological concepts from us, these have not become obstacles to communication between him and his students. On the contrary, he said frankly that this is a good opportunity for him. While contacting his students, it can give him a deeper understanding of everything in China.

He likes Chinese culture, and prefers all kinds of Chinese delicacies, such as sliced noodles, dumplings, big plate chicken and so on. In the interview, he said that part of the big reason for coming to China was because China has a lot of food that attracted him.

Chang Zhichao, a student in English Class 16001 of the English Department, commented on him: “Marlin’s classroom atmosphere is lively, funny and humorous, and he often interacts with us. It is easier to take his class, and more is to communicate with friends.”

Han Yuxi, a student from Business English Class 16001 of the English Department, said: “Marlin is usually very enthusiastic and will take the initiative to greet students on the road. He is a very easy-going foreign teacher and looks forward to his class every time.”

Marlin has won the title of Excellent Teacher, and has also recorded a video public class on IT professional English on the NeuMOOCs platform of our school.

His English classes have greatly improved the students’ oral English. Marlin often participates in English corner activities organized by the school, so that students have more opportunities to communicate with them.

At the same time, Marlin held talks on Eastern and Western culture with Luke and Charles foreign teachers. The lecture was full of seats and was well received by the students.

Teacher Marlin, who is loved by students, passes on happiness and language learning in this way and encourages everyone to try more.

Welcome Students of 2020 at Dalian Neusoft University of Information

Daniel – Education with Dedication and Love

Luke – The “Cavalier” Teacher at Neusoft 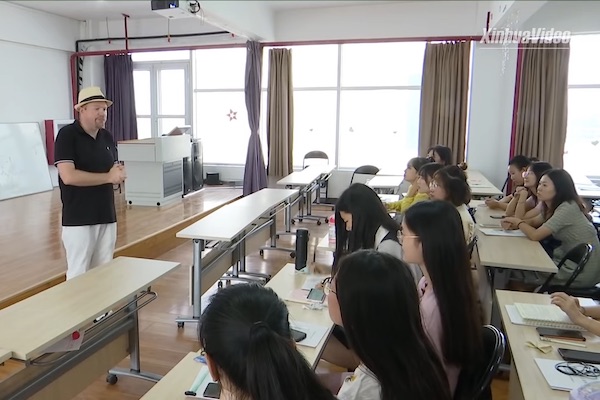