By Kiran Bhat, Teacher in Shanghai 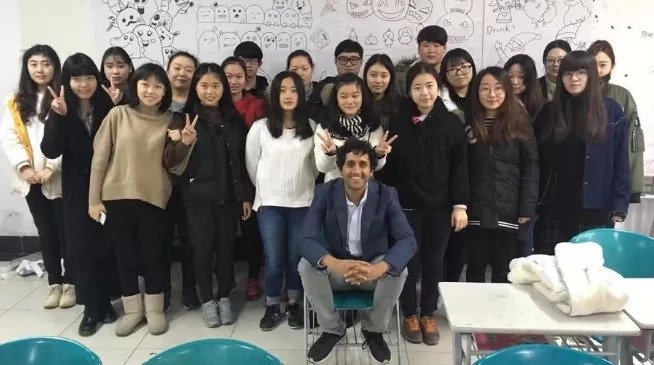 I moved to China quite randomly. Due to family pressure to do something that earned more, I had decided to quit my job teaching online, but I still wanted to pursue a life lived globally. Shanghai is considered to be one of the rising cities of the world, and I had visited China in 2013 for a month and had fallen in love with the city during that time. I thought if there was a place with work that paid well, but also the grit and the edge that made a place feel like home, Shanghai would be a good match.

So, I came to Shanghai on a tourist visa, chose a cheap place to live via Airbnb, and spent my first week on a job hunt. At first, I was a little disappointed. Most of the work was geared towards teaching children, a field I had no exposure or interest in. I interviewed for some tutoring agencies, but they were only willing to take me as a part-time teacher, meaning I would get paid little. And, a lot of the prestigious English learning centers were notoriously corrupt in China, famous for not paying their teachers on time and forcing them to work beyond the required hours. But, I had one giant hope in the back of my mind before all of this began, that I would be able to work as a college teacher in Shanghai.

Unlike in the U.S., India, or many European countries, where the path towards being a college teacher requires a lot of education and luck, Chinese universities are known to recruit English instructors on the basis that they are a) native speakers, b) hold passports from the U.S, U.K, Australia, Canada, New Zealand, or South Africa, c) have graduated from university d) have an accredited TEFL certification or teaching certificate and e) have more than two years of work/teaching experience.

Since I cleared all of these qualifications, I was actually in a good position to be hired at a university. The main problems were that 1) I was in Shanghai, when most of the university positions are in Beijing or in small Chinese cities, and 2) I had come in early September, when most university positions are filled, and most classes are already starting. If I had come in April or May, it would have probably been easier to have been considered for multiple positions.

Luckily, I was accepted for an interview at the Shanghai Industrial and Commercial Foreign Language College. The interview was competitive, and had multiple candidates. We were asked during the interview to talk about what it means to be a teacher, explain our experiences and values, and plan a lesson about film and do a short mock class in front of the interviewer. I went home convinced that I hadn’t gotten the position, and I was most likely going to have to take a job tutoring or working for a English center. I think I made a fist pump to myself when two days passed, and I got a message from the interviewer saying they wanted me to come to the office immediately to sign my contract.

The first day, I put on one of my best suits, boarded the free shuttle to the university at 7 in the morning, and held copious notes in front of me as I prepared for my first class. I was expected to teach three days a week, and to have four classes of 80 minutes each day.

The first batch of students were surprisingly naughty. They spent a lot of time chatting amongst themselves, openly using their phones, and clapping loudly every time I said something. I was convinced Chinese students were quite rowdy, until I attended my next set of classes. Most of the students were shy, diligently taking notes, repeating my corrections. Only a small minority were big personalities, and a smaller minority were not paying attention, or sleeping. I finished my first week knowing that I had a lot of classes to prepare, students to finesse. One of my colleagues told me that, as I was telling her about all the work I had to do, I had the biggest grin on my face.

Teaching at the college is my favorite job thus far, but like with any other work, I would recommend it with the following caveats.

In Shanghai and most global centers, working at a college pays a lot less than working at a private training center. Colleges are usually financed by the government or do not have a lot of money, so they usually pay a wage acceptable on the local level. Training centers, on the other hand, are usually where the wealthy people of Shanghai flock to, and so they get a lot more students, and thus are able to offer a lot more services. In Shanghai, the average training center, for 40 hours of work per week, will offer 16,000 to 20,000 RMB per month, health insurance, flight allowance, housing allowance, and transport reimbursement. I am currently being paid 10,000 RMB per month, and I get no extra benefits.

Lesson planning and grading does take a lot of time, and it is unpaid. Training centers usually allot a certain amount of their paid work weeks for office hours, giving you time to prepare that is during work. Colleges, however, more or less expect you to do all the work on your own time. You have to usually prepare the readings, grade the activities, print papers and work on various bureacratic forms, and all of the time and energy comes out of your pocket. I am being paid to teach for 16 hours a week, but with the lesson planning, I am probably working something like 25.

That being said, there are mostly benefits to teaching at a college.