By Kim, University Teacher in Kunming 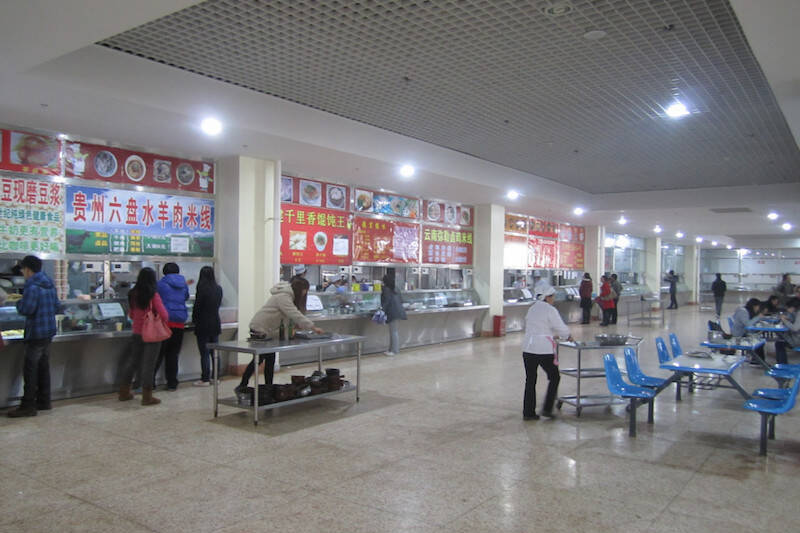 One of the most frequently asked questions that I receive from people outside of China deals with what I eat on a daily basis. Chicken feet? Pig intestines? Bugs? Well, those things do pop into my food repertoire sometimes, but generally I think that the food I eat here is pretty normal.

(I guess I should add that Chinese people are equally amused by my diet, as some of the first questions I’m generally asked after, “Where are you from?” have been if I like Chinese food, I cook for myself at home, and if I eat “Western” or “Chinese” food more often.)

The Chenggong campus of Yunnan University has two monstrous dining halls, both with multiple levels featuring seemingly limitless options of what to eat or drink for every meal.

Students eat most of their meals here because there aren’t many other options. A strip mall that opened up outside one of the university’s gates has a decent selection of restaurants and dessert shops, but the university seemed to be a little threatened by these other options and has since permanently locked the gate nearest the mall. They said it was for security reasons, but that sounds a little suspect to me.

I’m perfectly satisfied with the food from the dining halls, because for less than 5 kuai (less than US$1) I can fill up on a complete hot meal with a cup of rice, a meat dish and a vegetable dish. Desert or a drink add an extra 1-4 kuai. It’s such a bargain! It seems pretty healthy too, although it is oily, at least it is prepared using real foods rather than processed, frozen & fried things often served in American cafeterias. I also get a chance to work on my chopstick skills! 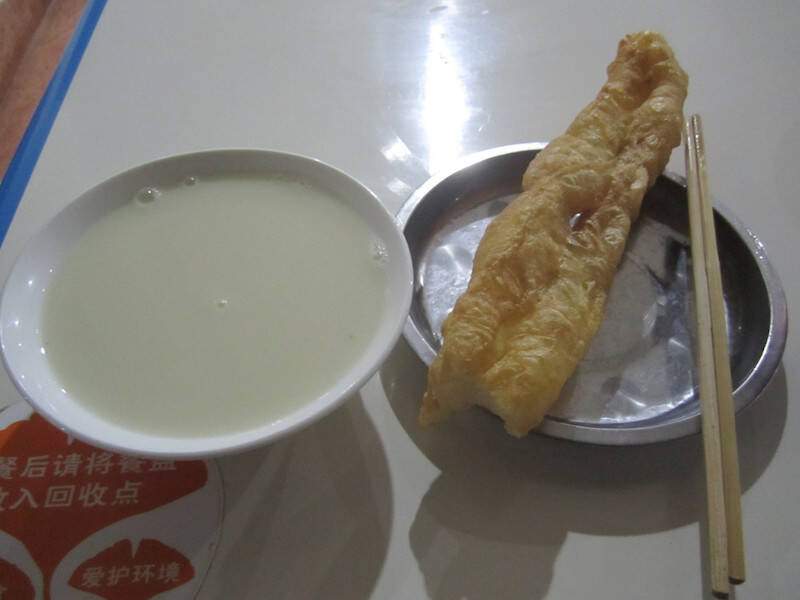 Breakfast of (Chinese) champions. Bowl of soy milk
(sweetened with sugar if you like) and a savory fried dough stick 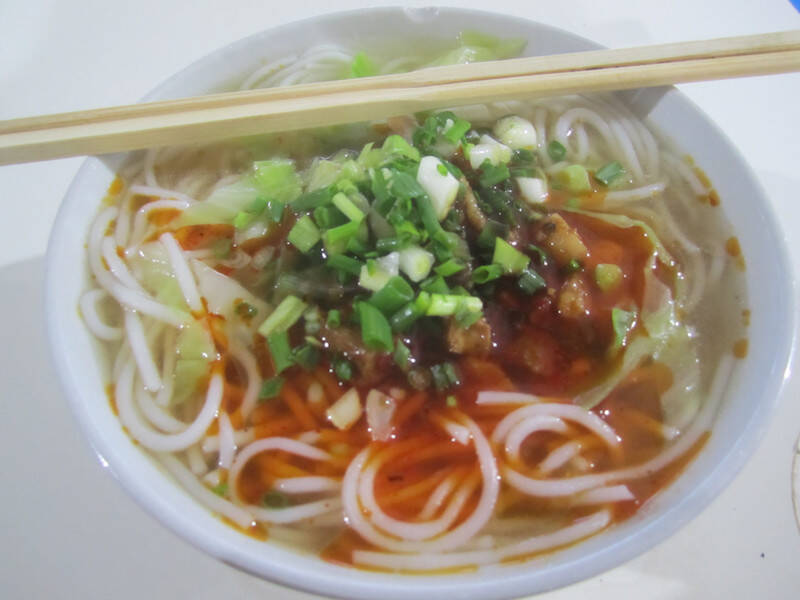 The most popular breakfast choice in Kunming is rice noodles in a spicy broth and some small
pieces of meat. Not exactly my favorite way to start the day, but whatever floats your boat. 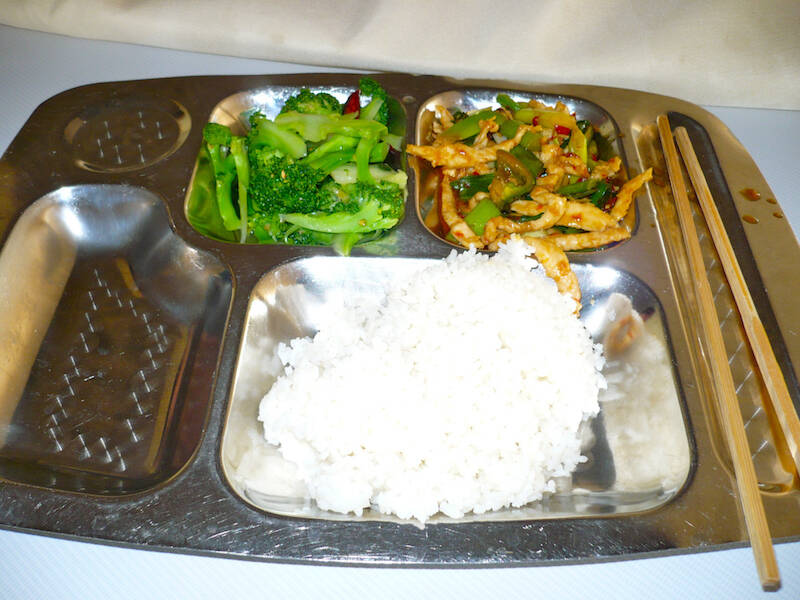 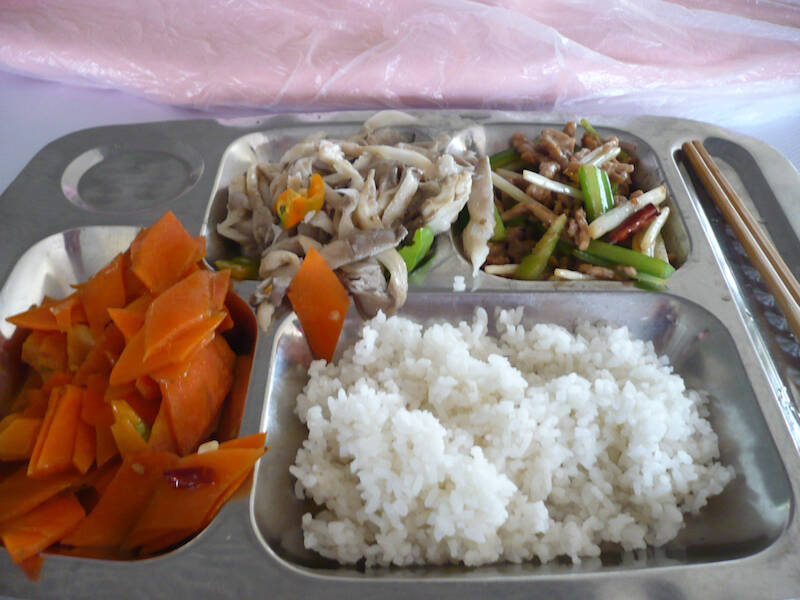 I was hungry today! Carrots, mushrooms and pork with green onion 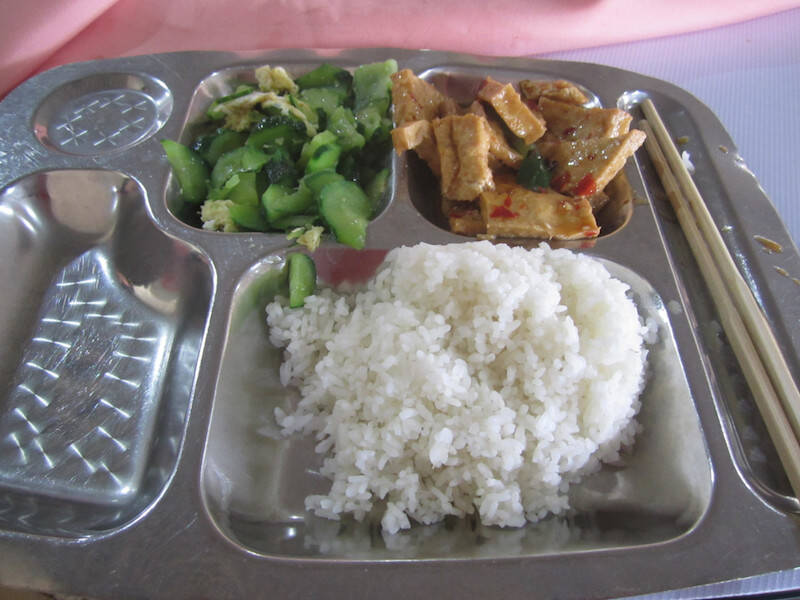 Cucumber and egg stir-fry and tofu Cabbage and diced chicken with carrot and zucchini 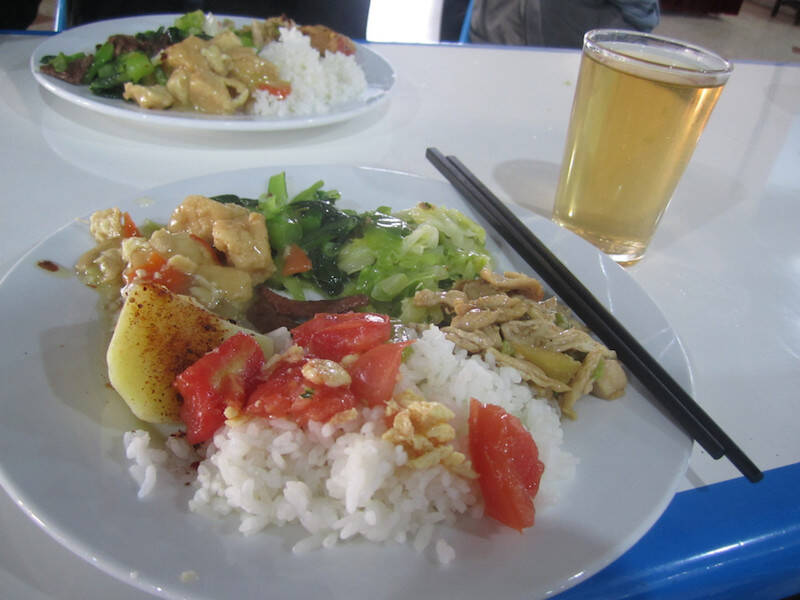 Sometimes I eat in the teacher’s section, where for 6 kuai I get access to an all-you-can-eat buffet and unlimited refills on tea and soy milk. It’s pretty much the same food as the regular cafeteria, but it allows for a little more variety on my plate. Here I have chicken, cabbage, bok choy, tofu, potatoes and tomato and egg stir-fry with a glass of tea. 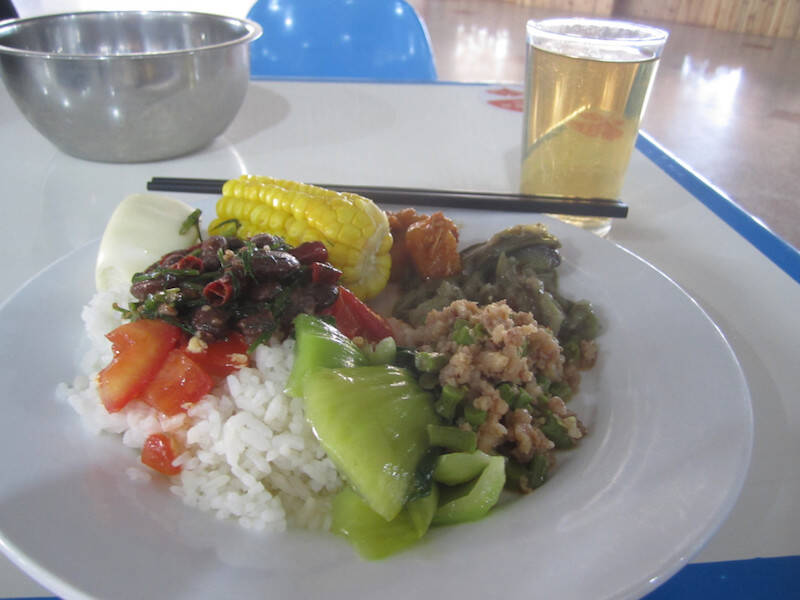 Another buffet meal. Bok choy, ground pork, eggplant, corn on the cob, beans and tomatoes.
Rice rounds out every meal, if you haven’t already noticed! 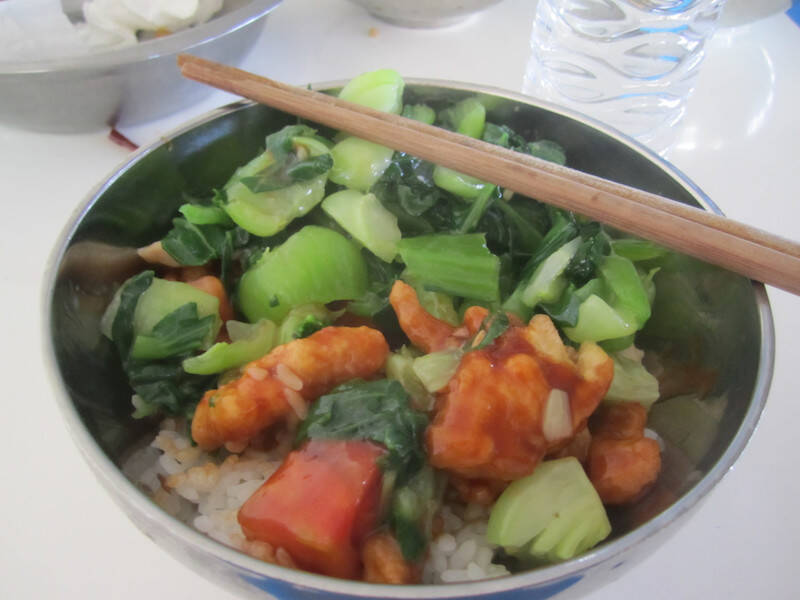 There’s also what I call the “Muslim section” of the cafeteria, a separate room where pork is not served.
They do, however, serve a mean sweet and sour chicken, pictured above with some green veggies. Sometimes after lunch, my dessert is a cup of freshly ground soy beans,
added with hot water and sugar to make a satisfying drink 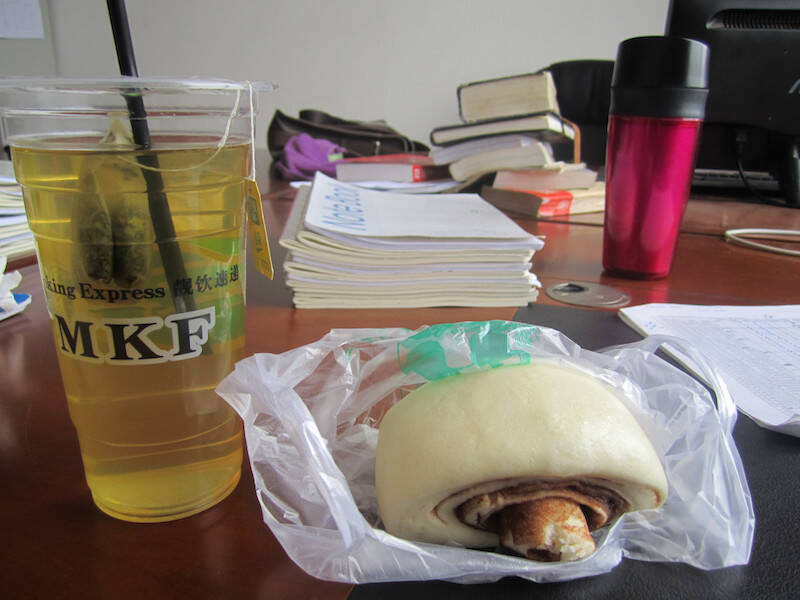 Or sometimes I opt for a Jasmine or Green tea with a steamed bread bun swirled with red bean paste (The first time I got it I thought it might be a cinnamon bun… it was not!) 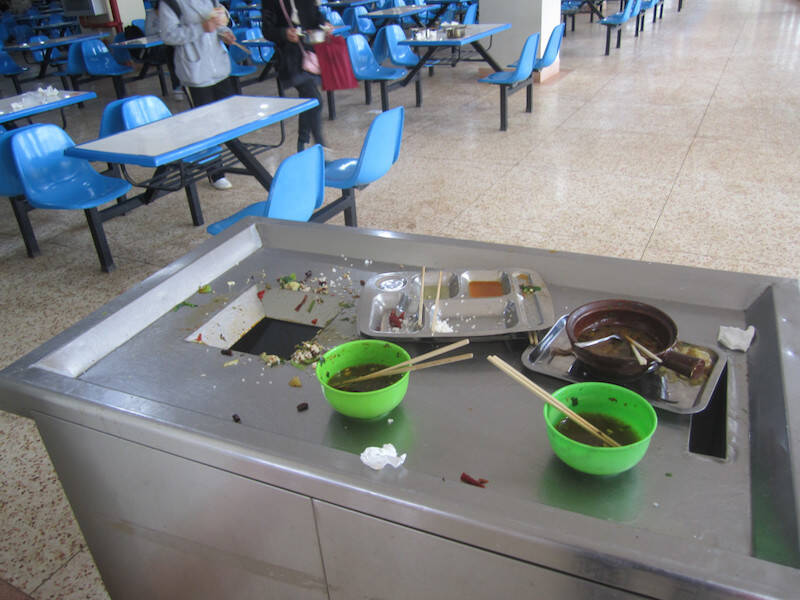 At the end of the meal, I bring my tray or bowl to these nifty collector things were a worker scrapes the leftovers down the chute. They are pretty ingenious devices, as they can also be pushed around the cafeteria to collect all the leftover bowls that students did not bus themselves.

So, which meal looks best to you? I’ve really been loving the food on campus, so much so that I wish I could eat there on my days off! If only it weren’t so far away.

Teaching English at a Chinese University Jessica – What it’s like teaching English to university students