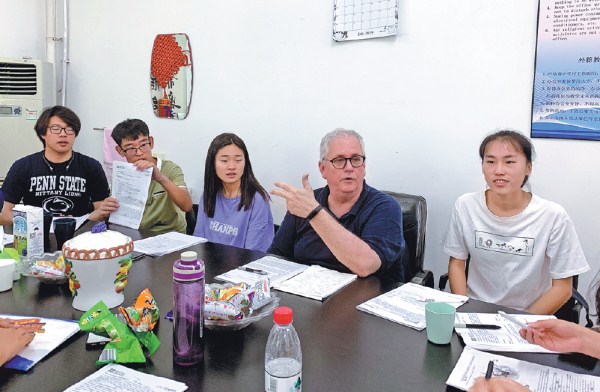 Twenty years ago, Brian Raymond Barrons came to the city of Jilin in Northeast China’s Jilin province to learn Chinese. However, the teacher from the United States is still not able to speak fluent Chinese.

Barrons is a hardworking student, but he has little time for his own studies after he became a teacher and devoted his all to his Chinese students.

“In 1999, a friend of mine invited me to come to Jilin when he knew that I was interested in learning Chinese and Chinese culture,” said the 63-year-old from Jilin Medical University. “I quit my job in New York and chose to learn Chinese at Beihua University.”

Before he arrived in China, Barrons had planned to look for jobs in metropolises like Beijing, Shanghai and Shenzhen after finishing his studies.

However, as a native English speaker with an impressive resume in the education field, these traits shifted his attention away from the university.

After four years of study in education at Michigan State University and Saint Meinrad College from 1974 to 1978, Barrons worked in jobs related to education in New York and Serengeti, Tanzania.

During his years in Serengeti from 1980 to 1994, he set up the first girls’ high school, changing the local tradition in which girls could not go to school and receive education.

“In 1999, there were no foreign teachers in Beihua University and the principal asked me whether I would like to be a teacher,” he said. “They also told me I could study Chinese for free in return.”

He agreed, firmly believing it would be a good chance for him to improve his Chinese through contact with more Chinese people.

“But things didn’t go the way I hoped,” he said. “My students seized every opportunity to speak English and none of them spoke Chinese with me.”

As a teacher who had been educating students for many years, Barrons was happy to see his students study hard and he began to spend most of his time in the classroom and in his office.

“Finally, I gave up my studies because I was really not a diligent student,” he said. “I would rather devote all my energy to be a good teacher.”

In fact, he has done even better.

“I was quite lucky to be his student in my last one and a half years at Beihua University,” said Wang Wei, Barrons’ assistant. “He is not only an excellent teacher, but also a man of great love who is always doing his best to help others.”

Wang became Barrons’ assistant after graduating from Beihua University in 2000.

“Every morning, he will come to his office at about 6:30 am and wait for students to join him at the English corner,” said the 40-year-old. “He has also prepared lots of English language material in his office, such as books for CET-4 and CET-6.” CET refers to the College English Test.

Besides academic performance, she said that Barrons is also concerned with the students’ daily lives. Most of his students treat him as a friend rather than a teacher. He will invite his students to his apartment for dinner almost every day.

“I can’t remember the number of times he had paid for tuition and trains tickets for poor students,” she said. “Over the past 20 years, he has been to many cities in China, but he seldom went to tourist attractions – he visits his former students instead.”

In 2006, Barrons became a teacher at Jilin Medical University.

“The university provides me more support for my work and more importantly, I can have an apartment in the campus,” Barrons said. “I really love living in the campus, seeing young faces every day.”

Every year, Barrons invites about 10 native English speakers from the US to be teachers at the summer camp, giving the students courses in various forms for a month. All courses are free for students.

“Some of the teachers are my friends who give me great support, but there are others that I had never met before they came to China,” Barrons said.

This year’s summer camp attracted nearly 200 students from the university.

“It was my second time joining the summer camp and it is of great help to my English studies,” said Gao Baiying, a 22-year-old senior majoring in preventative medicine.

All participants in the summer camp had the chance to learn from 10 different teachers in both large classes and group study.

“I have learned lots of English words, practical English dialogues, and the culture and history of the US,” she said. “All of us were unwilling to leave the summer camp on the last day.”

In return, Barrons also received lots of care and love from his students.

“On April 16, about 60 of his former students came to Jilin from different cities, celebrating Barrons’ 63rd birthday,” Wang said. “We didn’t tell him in advance, giving him a big surprise.”

Barrons is now applying for a permanent residence permit in China.

“I love the campus, my Chinese students, Chinese food and also Chinese culture,” he said. “Therefore, I still want to stay in China after retirement.”