Twenty years ago, many English-speaking expats in China applied for teaching jobs because work was easy to come by. Routine inspection of qualifications was almost nonexistent and all most people needed were their mother tongue and an engaging character. 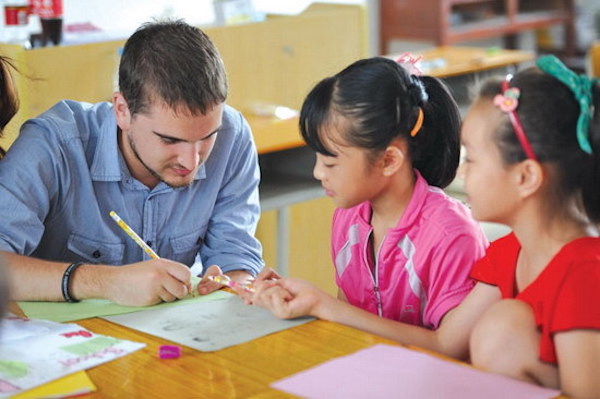 An British teacher teaches Chinese children how to learn English through paintings. Many students in China have trouble learning English and using it in their daily lives. [Photo/China Daily]

The old criteria no longer apply. China is now demanding better-qualified, more-competent English teachers, and by the end of the month the nation’s top regulator of expat employment is expected to further raise the bar by implementing a tough application policy.

“Expats who want a job as an English teacher will have to obtain a teaching certificate in China, just as Chinese teachers do,” said Qiu Xusheng, a senior official with the State Administration of Foreign Experts Affairs.

The new policy has been designed to meet the ever-rising demand for high-quality foreign experts, Qiu said. Although he declined to reveal further details of the upcoming regulations, he said regulators at the provincial and municipal levels will be required to fully implement the new policy.

“Once we confirm that people have been hired illegally, we will report the facts to the relevant administrative departments, such as the public security department,” he added.

A previous guideline, issued in December, imposed stringent requirements for expats from non-Anglophone countries who want to teach English. According to the document, to qualify for an employment visa, teachers from non-English-speaking countries must hold a bachelor’s degree or higher from a university in an Anglophone country and have two years’ teaching experience. The latter requirement can only be waived if the applicant has an accredited certificate in teaching English as a foreign language or holds a teaching certificate in their home country.

Given the lack of details about the new policy, it’s still too early to judge how effective it will be, but Chris Stevens, of Houghton Mifflin Harcourt International, a global education provider, believes it will improve the situation.

“The new policy is in any sense a good thing. The government is taking steps aimed at improving the level of expat teaching in China,” he said, pointing out that some expats enter the country on a tourist visa or a visa issued for business trips, then look for work as teachers. Some take the job for a couple of months just to cover their travel fees.

“Students can hardly learn a lot from teachers who lack systematic training,” Stevens said. “I don’t see any reasons to lower the standards for English teaching when many other professions have them.”

The new guidelines might be hard on expats who lack professional training and are unable to use their cultural backgrounds as advantages and regard language teaching as a valuable tool to help children grow, he said, adding that well-trained, professional expats can help students in fields unrelated to language skills.

“Chinese students tend to be quieter and stand back a little bit compared with students in the United States,” Stevens said. “If teachers are aware of the cultural differences and (know) how to motivate quiet students to speak out, how to help them become more confident, they would really benefit the students in the long run.”

Data from the State Administration of Foreign Experts Affairs show that China currently needs at least 100,000 foreign teachers and the number is expected to rise. That has resulted in a mixture of good, bad and indifferent expats flocking into the teaching market, where competence varies greatly between institutions and different parts of the country.

Last year, China Business View in Xi’an, the capital of the northwestern province of Shaanxi, conducted an investigation into eight expat English teachers in the city; three worked for legitimate language schools, while the others were introduced to their students by friends or via the internet. None of them was able to provide proof of their qualifications, the report said.

Some of the teachers had strong accents when they spoke English because they came from Russia or Africa, while some had worked in nursing or other professions in their home countries and had no teaching qualifications or experience.

Zhang Fucheng, vice-president of Yanshan University and a political adviser, said many schools and establishments hire foreign students or tourists without gaining the approval of the education authorities or departments related to foreign experts’ affairs. They do so partly because they find the application procedure too complicated and there are no punishments, even if the illegality is uncovered.

Many schools employ unqualified teachers to meet the soaring demand from a new generation of parents who want their children to have English lessons as early as possible and are willing to pay the high fees demanded.

“Almost all the students in my daughter’s class are taking English courses after school, and most have attended classes taught by a foreign teacher. My daughter started learning English in kindergarten. A foreign teacher came once a week to play with the kids, assisted by a Chinese teacher, but it was hard to gauge her influence on the younger children,” said Li Jinhui, the mother of an 11-year-old in Beijing.

Later, Li transferred her daughter to an English school that doesn’t employ foreign staff because she believed the expat teachers were not worth the high fees－usually more than 20,000 yuan ($3,000) a year. However, she said many parents still send their children to institutions with foreign staff “because they want to provide the best for their children, and maybe those who do not speak English themselves still trust a foreign face.

“Rather than have a nonnative speaker teaching English to my kid, I prefer my daughter to learn English from a Chinese teacher at a credible training institution. She can hone her language skills when she has the opportunity to study abroad in the future,” she said.

For some, the question of whether the new policy can be properly implemented nationwide is still open to debate because supply and demand varies in different parts of the country.

In first-tier cities, such as Beijing and Shanghai, higher standards and more regulations on recruitment will become the future trend, but the regulators may not have to impose further measures because competition for teaching posts in those places is so intense that only the best will be offered work.

According to Chi Yaqing, head of recruitment of foreign-language teachers at New Oriental Education and Technology Group, applicants without at least two years’ experience and a degree from a recognized university are unlikely to pass the first round of screening in Beijing.

Li Xin, an English teacher at the High School Affiliated to Renmin University of China in Beijing, said parents have higher expectations of foreign teachers than before because “they want their kids to learn much more than just improving their pronunciation”.

Some parents told her they hoped foreign teachers would provide more information about things such as preparing for college applications and advanced speech and writing skills.

“Few students, especially in first-tier cites, are scrambling for the simplest metrics of academic success－many high school students look forward to getting advice from foreign teachers to help them better prepare for applying to top universities overseas,” she said. “If teachers cannot fulfill the rising expectations, they might not find a well-paid teaching position at all, even if the government does not raise the bar.”

Whether the new policy can be implemented in second- and third-tier cities remains a concern, because demand far exceeds supply and many unregistered institutions neglect to get official approval to issue work visas to expat teachers.

Moreover, some schools in less-developed regions may be unable to hire qualified teachers because expats prefer to work in big cities, and the schools cannot afford to pay teachers who have professional qualifications, degrees and experience.

According to the State Administration of Foreign Experts Affairs, although only 582 institutions in Shandong province are allowed to grant work visas to foreign teachers, thousands of institutions employ expats.

At an institution in Qingdao, Shandong province, a staff member said applicants’ resumes were always checked, but refused to say whether the expats listed in the advertising brochure had work visas or TEFL certificates.

“They are all white people. No need to worry about their teaching level. Believe me they are all experts and they can speak fluent English,” said the woman, who declined to be named.

Zhang, of Yanshan University, said it can be difficult to hire competent teachers, but that’s no excuse for employing people illegally.

“In addition to setting higher standards for applicants, the regulators have to do more to ensure the policy is enforced. The policies issued by the State Administration of Foreign Experts Affairs lack legal constraints,” he said.

He said a special agency is needed to verify and evaluate the qualifications, competence and ethics of expat teachers. It should also help foreign-language teachers improve their professional skills by providing useful resources and courses, and by helping them to secure positions in a market that is bound to become increasingly competitive.

My 12-year-old son is taking an online oral English class with a teacher from the Philippines. The teacher chats with my son on Skype. I don’t know whether the teacher has obtained a teaching certificate or not. Actually, I know nothing about the employment procedures, I just think the class is quite cheap. It only costs 30 yuan ($4.50) an hour. I’m not expecting that my kid will learn a lot from a foreign-language teacher. I just want my son to practice English with a native speaker.

My daughter is 18 and she is taking a TOEFL class with a teacher from the US. He is very capable, I think, and gives my daughter a lot of good advice about the college application process, which is quite confusing and overwhelming for me. I don’t think he represents the general level of teaching competency of expat teachers in Beijing. All I can say is that I am quite satisfied with my daughter’s teacher.